Red Point Back In Action

TanGO is back, so work on the Red Point Secret Ops mod will be resuming shortly. The team really needs a solid editor to translate the project's website from Spanish to English and clean up the grammar in the game's eight written chapters. Once the dialog has been polished, Red Point can begin looking for voice actors. Email Tango if you think you can help. Here's the game's Perry backdrop and Wraith and Vampire cockpits. 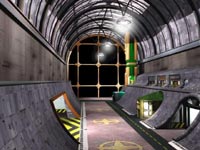 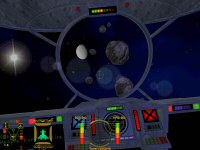 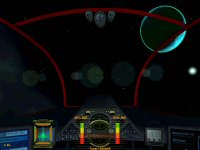 Last Chance To Fly The Tarsus

Standoff Episode 4 is still a ways off, but there will be a small update to Episode 3 soon. The patch will correct several minor issues that have been highlighted with the popular mod, and the Tarsus will be replaced in the simulator. Now's your chase to fly it before it's gone!

Yes, we are up to something. It involves a bugfix patch, a ship, and a disappearing Tarsus. You will find out soon enough, when the patch is finished, tested, and released. Needless to say, no release date... it may take a day, a couple of days, maybe a week or two at the most.

In any case, when the patch is released, people who download it (or the whole episode, which will be updated at the same time) will no longer be able to get new Tarsus scores at all. The old scores, however, will not disappear. They will remain on the Tarsus ship profile page forever.

So, just think about it! Everlasting fame could be yours! If you get a high score in the universe's crappiest ship now, it may remain there forever!

If the fleet-centric Against All Odds, isn't quite your style, the TCS Saratoga RPG might be more appealing. Pilots from the Saratoga's squadrons engage in forum based role playing on a much more local scale. Most activity is conducted on their message boards with occasional IRC sessions. The action takes place about six months prior to Wing Commander 3. Many characters are currently engaged in support of the Battle Earth, so they need every pilot they can get. Space Operations are being conducted now.

The Saratoga is a Concordia Class Fleet Carrier and we are recuiting for 2 Squadrons, the Red Tails in Rapier IIs and the Unsung Heroes in Sabres. Contact powell99 or MajorCamKollent for more information.