Kilrah Moreira has sent us two exciting new wallpapers. You may recall his awesome Arrow V model from a few months back... well, now you can see it in action! The Arrows are out in force in "Scouting the Void" (left)... and they're tangling with a group of Strakha in "Break Formation!" (right). They'd better watch out -- Warbirds says that "a lone Strakha has been known to eliminate four Hellcats in the space of ten minutes"... and those Arrows are outnumbered five to two! 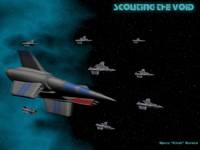 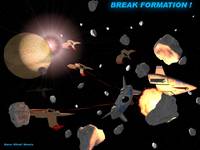 I must say that this wouldn’t be possible without the help of Lorddarthvik and Zohrath. Thank you very much, guys. :)

A 1280x960 version of the Strakha/Arrow battle is also available here.