It's almost the end of the month, so we've got some spare bandwidth to burn. Apparently a lot of people still haven't seen Wing Commander Academy, so anyone up to a 3 gigabyte download is welcome to check it out. The episodes were originally aired out of chronological order, but we have a guide to help you decide which way to best view the series here. If you originally saw these years ago and haven't seen them since, watching them again now is a great way to spend six free hours.

Smaller 65 megabyte versions of each episode are available here.

When we recently looked at the progress of Origin founder Richard Garriott's Tabula Rasa, the game seemed a bit different. The unicorns and fairies had been replaced by cyborgs and overcast skies. Quarto found an article that addressed the change. I'm not sure I follow their reasoning, but for better or worse, the style has changed significantly. They claim the underlying concepts remain the same, but it'd be interesting to hear from someone who had been eagerly anticipating this title from the beginning.

Originally announced some time ago, the game underwent a marked shift just before E3 2005. Richard explained how it began with a rather trivial observation: everyone on the development team exclusively played female characters.

Why was this? Well, they discovered that as the game’s extremely far-fetched high fantasy style evolved, it became harder for male gamers to connect with their male avatars. Thus began a period where they tried to put a little more grit into the game; a process that would eventually completely redefine its setting.

Despite the marked shift in style from fantastic high fantasy to gritty alien vs. human doomsday, the ideals that inspired Tabula Rasa largely remain unchanged. 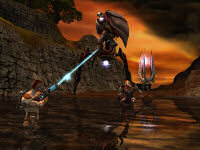 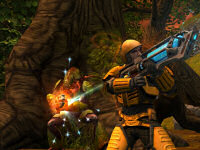