Raptor has sent us the latest chapter of HTL, along with a progress report on the new HTL website's progress. It sounds like there's going to be a whole lot of content there. I'm not sure why it's necessary to make a site for specific resolutions, but hey, here's Raptor with the info:

HTL continues with the third part of Check And Mate, a four parter jointly written by myself and Joe "Wraith" Guida. As you saw in the past two chapters, Battlegroups Valkyrie and Rapier had begun co-operating to stop a pair of enemy carriers that had broken through the defensive line. A strike launched by the Yorktown had just made contact with the enemy. This story picks up from there. Please send any and all comments to me or to Joe at captpowell1@earthlink.net

The story is at: http://homepages.ihug.co.nz/~theraj/archives/ch206.htm

The Holding The Line Dot Net Site is coming along well. Redoing the site in two resolutions has put us behind schedule at little, but we're taking the opportunity to add new features like a search facility and site map. We're also adding over a hundred non HTL stories to the Aces Lounge section.

Put A Victory On Your Desktop

Now that work on Lorddarthvik's Victory model is complete he has been working on a jump point effect. What better way to show off his work than with a new wallpaper? Lorddarthvik admits to doing some post-rendering work on this image, but we don't care as long as it looks good. 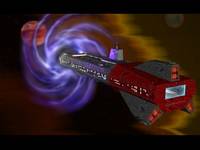