Parade Of The Privateer Concept Shots

A lot of people seemed pretty interested in the information surrounding yesterday's Privateer Online site, so here are some shots of the also cancelled Privateer 3. This one predated both of yesterday's featured games and was on the table during Prophecy and Secret Ops' development. It would have been a primarily single player adventure that continued in the original Privateer style, and some of the ships and scenes overlap between this and the POL environment highlighted yesterday. Note the Kilrathi writing above the door in the second shot and the familiar weaponry in the third. These shots came from the only significant source of information on the game, a Computer Games Strategy Plus cover story in May 1998. These were scanned seven years ago, so we're also on the lookout for anyone who still has the magazine and could provide full higher quality scans. You can find a few more shots here. 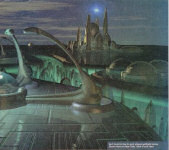 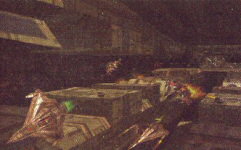