On Monday we reported that a Privateer Remake spinoff was looking for (intensive) beta testers. Here's a first look at what's different in this version:

The Kamekh is now equiped with visible player-pointing turrets, four for the nose and one for the tail. The turrets may be seen as a form of flak to take down enemy fighters and asteroids while the heavy wing cannons do more damage and are used on bigger targets. The four nose laser turrets are equiped with laser weapons which have a short refire rate and a long fire distance, so you'd better make sure not to fly directly into a blast. The tail turret is equiped with two plasma guns which can do massive damage to your ship while the shots are fairly slow and easy to avoid, so better attack from the back, right?

The third screenshot shows our new built in nav computer which looks very similar to the one of the original Privateer. It may be updated later with a high resolution model, so if somebody wants to contribute one, feel free to do so... 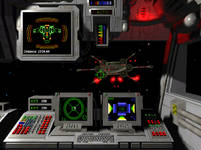 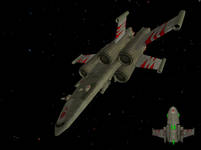 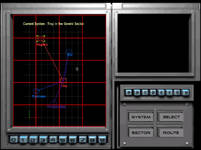 Following the technical difficulties at WC Revival, HCl's Wing Commander Editing Site is now back online. The problem apparently resulted in everything on the server being wiped, but everything should have been reuploaded now. HCl's site is a great source of patches, one of the most recent and impressive of which being a patch to allow Armada to be played online through DosBox. HCl is also responsible for some major contributions to numerous Secret Ops based mods. WC Revival itself has yet to be reuploaded.