Wing Commander: The Price of Boxes

The price of the original Wing Commander game has increased over the past year as DOSBox has decreased the need for Kilrathi Saga. The prices fluctuate quite a bit though. Last week I was able to grab an entire WC1 Deluxe for $15 after shipping. I've also seen them bid up to $90 over the last month. 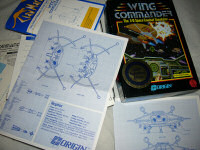 This week someone listed the box and instructions on eBay. No game disks were included, but the wonderful Claw Marks book and fighter blueprints came with it. The final bid was $15. That's definitely not as good a deal as I got, but everyone should be stocking up on WC1 manuals if they plan to assault Claw Marks author Aaron Allston for autographs at DragonCon this year.

Edit: LarkInFlight was the lucky winner. His Polish Wing Commander 1 lacked the original blueprints, and he was in need of a replacement Claw Marks. It's good to see new people coming online in 2005 to complete their collection.