The Wing Commander Tactics mod for Nexus has just added another ship to its arsenal: the humble Dralthi MkII. It's loosely based on the nonstandard Dralthi on the right. Work to get the model in to the game's engine is still ongoing, and the fighter will probably end up more powerful than expected since Nexus doesn't support giving fighters missiles. The guns will be boosted instead. You can post your comments on the new ship in this thread. 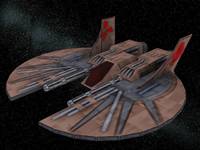 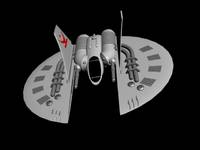 The team behind Eve Online has announced an expansion to the space based massively multiplayer game. The Exodus package will be a free online addition to subscribers of the main game that sets the scene for an upcoming retail expansion. Routes into some ares of space will become disabled as newer links open up. Freighters, dreadnoughts and outposts will make an appearance. There will be many upgrades available for new forms of combat. Eve is known for having the largest interconnected space sim multiplayer universe. Rather than numerous separate servers or shards, all Eve Online players cooperate in one massive environment. Fans will also be able to meet eachother in person this October. The Eve Online Fan Fest will be held from October 19 to 23 this fall. Details will be forthcoming.