There have been a lot of developments lately for eddieb's Flight Commander engine, the latest development being explosions. The enhancements as shown in the screenshot below are 3D shockwaves, fireballs, and ship debris. This will probably be tweaked a bit in future, but already looks good. The other developments relate to Iceblade's mod for FC, Ranger's Glory. First of all, Cyberion's Rapier II has been fully converted to FC's engine and the files for that can be downloaded here. Secondly, the Ranger's Glory website is now up and running complete with lots of details about the project. You can find the website here. 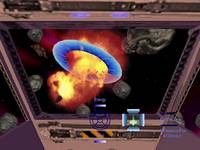 The word over at GameSpot is that Wing Commander actors Matthew Lillard (Maniac, WC movie) and John Rhys-Davies (Paladin, WC3 & WC4) have been cast in the Dungeon Siege movie. Dungeon Siege will be directed by Uwe Boll, a man with a long history of making terrible video game movie adaptations with the flops that were House of the Dead and Alone in the Dark already under his belt, Bloodrayne coming soon, and Far Cry coming next year. With such a history we wonder if Maniac and Paladin are making good career moves, but at least Wing Commander won't be the worst video game based movie he's starred in. For more Dungeon Siege news, don't forget to check Lancers Reactor. Dial-up users should disable browser images before visiting.

LOAF Heads Off To Meet Forstchen

CIC reporter LOAF is heading to a civil war battle reenactment at Gettysburg today. WC author William Forstchen will be in attendance promoting the third book in the Gettysburg Trilogy. Hopefully LOAF will get to meet him and chat a bit about Forstchen's WC novels. Wish him luck!