Say Hi To Your Own Rapier

Just last week we were talking about renting a battle-hardened CF-117B Rapier for £2000.00. Today we have an absolute steal compared to that. A film prop reseller in the UK is currently listing a Rapier I for only £500 on eBay. It would need to be picked up from Edinburgh, Scottland by July 1. Unfortunately shipping might end up costing much more than the unit itself, but if you had the room, it'd be worth it. Any CIC reader who ends up with this modified P1 Lightning can count on some fanatical visitors in the near future. 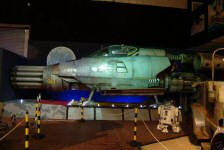 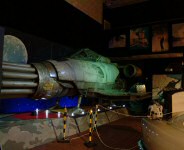 Thanks to Vorsuc for spotting this one.

Ultima Online: Mondain's Legacy has been officially announced to the public. LOAF got a chance to discuss some of the new features of the game a few weeks back, and it looks fairly neat. A new playable race, the elves, are being introduced along with a variety of foul new enemies. There are new dungeons and areas in addition to a special spellweaving skill. The quest system has been revamped and storage capacity increased. The most interesting new feature for us is the exciting cooperative collection infrastructure. Friends can band together to fill museums, libraries and zoos and earn rewards for keeping their collections up to date.

The expansion should be released this fall at $29.99 with all the previous UO expansions included. Periodically people bring up the subject of role playing a group of stranded Confederation pilots in Britannia. This might be a good opportunity.

Q: Will cooking get any changes/additions?
A: Yes! There will be new cooking recipes. Cooks will be able to make food and drink that increases the regeneration rate of stamina and if eaten while poisoned, it reduces the number of “ticks” remaining on the poison. Other new food removes curses, increases damage (both melee and spell) for a brief burst of time, and grants a blessing when eaten.

There will also be a Food Decoration Tool that can decorate cakes, cookies and pizzas.

Character transfer to the Origin Shard should now be allowed as well.