The Privateer Remake team is looking for a few testers to polish up their 1.1 release. They've been working for the last three months to come up with solutions to a number of problems that people have had with the game. A few awkward additions will be removed and some more original content will be included. This is a call for people with the time to provide constructive feedback, not those interested in a sneak peak of the improvements. You can find details on applying for the test slots at Crius.net here.

We are entering the beta testing period for the 1.1 privateer remake beta. We need volunteers who are interested in giving us detailed feedback about what is better, worse, and broken since the 1.0 release. 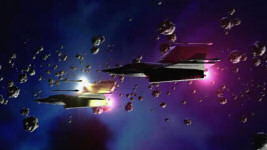 GameDaily Biz has conducted an interview with EA Marketing SVP Frank Gibeau. The topic focuses on Electronic Art's dominance in the video game market place and what that means going into the next hardware cycle. With a quarter of the market under its belt, the decisions EA makes in the next few months can shape the video game industry for years to come.

BIZ: You mentioned transition as a friend, but I'm sure there are dozens of companies in the industry that don't have the level of annual revenue that EA has that would prefer not to see the next generation come so soon.

FG: That's right, that's right. Hey, you know we were once their size. [laughs] And you know why we're bigger now? It's because we hit a couple of transitions in a row right. And once you get that base built, in terms of the business, then you can spend money on things like Spore and things like Black. And you can actually build more games on the next-gen earlier. So it starts to become something that builds on itself. Yeah, midsize publishers, small publishers are going to find this transition brutal. The cost of development is going up, and we have strategies like Renderware and other things that are allowing us to offset that a bit. Other companies can't.

BIZ: Looking at EA's overall business, there's been some talk that EA might try to become like the next Disney and branch out into other mediums, like music or movies. Are you setting your sights beyond games?

FG: No, we're a game company. That's all there is. We have not drank the Kool-Aid and think we're Hollywood. Our destiny does not lie in Hollywood. We're not a movie company; we're a gaming company. Interactive entertainment is what we do and there are going to be opportunities for us to dabble in things, try new things, and we're going to do that, but we do not have movie-itis.

You can check out the full article here.