After a few days of tinkering by Flight Commander programmer eddieb, there has been some success in getting the game to run in Linux. Flight Commander is a complete Prophecy-style game with an open source engine, all created by eddieb. The engine itself has an impressive list of features. While the Linux version hasn't yet been released, cross-platform compatibility will no doubt make the engine more attractive to mod makers. In other news, the project now has its own forum. 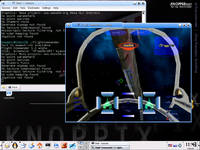