Cyberion has scanned several new manuals for us. Several are the side-documentation files included with Wing Commander 3. The Russian version of the instruction booklet for Wing Commander 4 has also been included. These are decent quality jpegs for the most part, so the file size is a bit bigger than some of the other manuals. You can find our other online documentation here. 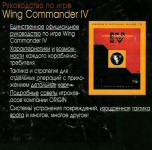 Sadly, Privateer 2 actor Clive Owen missed out on the best supporting actor award at last night's Oscars ceremony. Best known to us as Lev Arris, Owen had been nominated for his excellent performance in the movie Closer, which has previously netted him the best supporting actor award at the Golden Globe awards. Earlier this month he won the same award at the Baftas. Still, Owen remains the only lead WC character to be nominated for an Oscar.