Battle of the Dark Screenshots

The Standoff team has shown off a screenshot from their intro that highlights a darkness graphical effect. In the blackness of space, only the hangar lights are visible. It's a cool effect when used appropriately.

Not to be outdone, the Saga team has released a screenshot that's entirely black! Just kidding. The shot below is a lens flare test. But the Hellcat pictured is mainly visible through its engine glow. 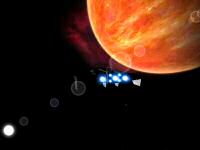 It seems that demand for Chris Roberts' talents have rocketed. While Chris was producer for just The Punisher this year, he has been named as producer or co-producer for seven movies due for release in 2005, and even one due in 2006. His IMDB record lists the upcoming movies as The Jacket, Edison, Ask the Dust, Lord of War, Lucky Number Slevin, The Big White, The Bird, and Grounded. Strangely, mention of another one of Chris Roberts' projects American Knight has disappeared, but if that is still going ahead, that will be his ninth project in progress.