Following on from their demonstration of how their Tallahassee model has changed and how it compares with the originals, here is the next in WC Saga's series of comparison pictures. This time it's the Kilrathi Transport as originally seen in WC3, and WC Saga's two versions. 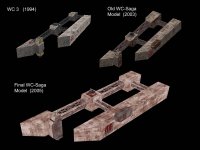 When Jetlag's site died a little while ago, a few files which were linked from there were suddenly lost from the internet. Fortunately LOAF keeps all kind of stuff on his hard drive, and has uploaded the missing files to the CIC's own server.