Raptor is taking the HTL website places. Where exactly we aren't entirely sure of yet. Stay tuned for more details.

As you've seen in the past few chapters, the battle for Nifelheim is already heating up, and enemy forces are closing in from both sides. The crew of the TCS Endeavour has already played a vital role in the battle by helping two other Confed battlegroups destroy a Nephilim dreadnaught, but their struggles are far from over. This story is written by Shaun "Iceman" Rashid. Please send any and all comments to him at velacia@rogers.com, not to me.

The story is at: http://homepages.ihug.co.nz/~theraj/archives/ch193.htm

In other news, I was able to make the downpayment for the HTL website recently, and we're on track to go live at the end of the year. We've got a heck of a lot planned for the site (including those tasty ships Cyberion has been kind enough to create for us) and we plan to unveil it step by step throughout 2005. The site will include message boards dealing with the site itself as well as with HTL, so there will be plenty of opportunities for you guys to help shape the site as it develops.

Tell Your WCA To Cover Up

If you've got a DVD writer, one of the best things you can use it for is to make WCA DVDs. But something is still missing.. like cover art for your DVD case. CTP wants to address that problem and has sent in this cover for people to use. 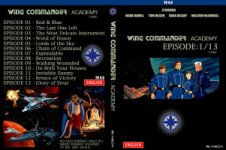