Today we take the wraps off a pair of new fighters for two different Wing Commander mods. First up we're going outside the Sabre for Wing Commander Saga. 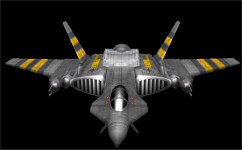 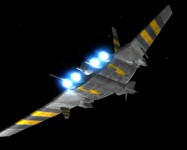 Here is the WC 3 style retextured Sabre that will be used in WCS main campaign. Model is done by Eder, textures by (Lynx). It'll make only a brief appearance as InSys and Reserve squadron fighter in some misssions and will not be flown by the player as far as I know.