Shedding Some Light On Saga Action

Lynx posted these Wing Commander Saga screenshots to the Forums:

Those screenshots don't really represent the graphical standards since I just took them in one of my test missions - they weren't intended to be shown off here. I just posted them since people wanted to see something new and I thought the action in these pictures was good. 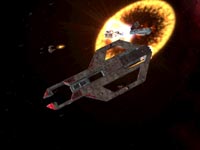 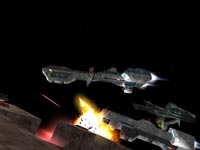 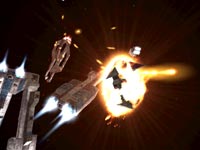 The campaign missions have everything better, more, better background nebulas/planets etc., installations and other places and such, and the grapical effects are better too there when you turn 32 bit graphics on. The engine trails, some weapon effects, textures backgrounds and everything looks worlds better.

About the performance, it's quite playable on lower end system too as far as I know (I think about 700-1000Mhz are minimum for stable gameplay, and a fast graphics card).