Ships of the Animated Series: Dralthi

The KF-100 Dralthi-class Medium Fighter is, as always, the signature Kilrathi fighter of Wing Commander Academy. Dralthi appear in episodes one, two, four, five, six, seven, nine, twelve and thirteen. Like the animated Scimitar, the Dralthi closely mirrors its game-based inspiration - it carries five missiles (two in racks above the cockpit and three in a centerline hardpoint) and two forward laser cannons. You can read more about the Dralthi's history here. 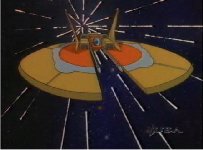 It's been a busy month for us at the CIC. Things haven't slowed down much from the Birthday to DragonCon to our server rebuilding. A few people have asked for updates on a couple promotional/merchandising issues that have been taking longer than expected.

Thanks for the interest in all these projects. They take a lot of time to organize, but don't hesitate to send us emails or drop by #Wingnut for status checks if you want to see how things are going.