Ships of the Animated Series: Dorkir

The Kilrathi Dorkir-class Transport makes a brief appearance in Episode 2, "The Last One Left". The Dorkir is defended by three dual-mount laser cannons. According to the original Wing Commander I & II Ultimate Strategy Guide, the name "Dorkir" comes from a shortening of the phrase "Dorky Name Here"! You can more about the Dorkir's history here. 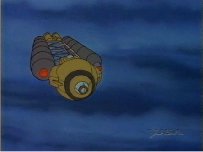 Attention Americans: can't afford a $4.99? Just love pan and scan versions of things? Find the word 'balls' offensive? Well, the Sci Fi channel is showing that movie of movies, Wing Commander, tonight at 11 PM ET/PT! The last time we quoted the Sci Fi channel's movie promotional blurb someone got mailbagably crazy about how we were perpetuating an evil movie conspiracy... so for the record, this is *not* our description: