Famous Wing Commander editor HCl has developed a patch that fixes the skipping video in Wing Commander Prophecy. Although it's a simple matter to adjust the sound card hardware acceleration, some people dislike this method. This alternative fix allows you to keep your acceleration turned up to its normal level and run Prophecy smoothly. Here's the directions HCl gave at WC Revival.

Download the patch at the bottom, and unzip it to the directory where WCP is installed. Then run Prophecy as usual. This patch co-exists quite nicely with the WCP High-Res patch, if you already have it installed. However, if you install the WCP High-res patch afterwards, you will have to re-install this patch, as a DLL will be overwritten.

Filler has recently created a standard space sim heads-up display for one of Pedro's side projects. It's not currently going into a Wing Commander mod, but it's heavily inspired by certain Wing Commander games. He thought some of you might like it, so here it is. 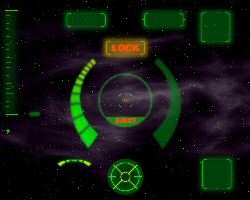