Mercury reports that Matthew Lillard was a guest on Carson Daly's Last Call late night talk show on Wednesday, March 31. Lillard played Maniac in the Wing Commander movie. Apparently Wing Commander was compared to a horrible ghost movie he did ages ago. Although I didn't see the interview myself, but I can only guess the entire audience gave him a standing ovation when they realized his amazing credentials. 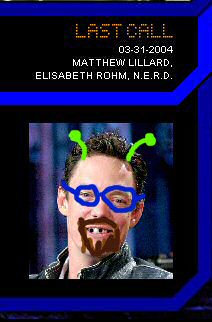