LOAF and Hades both acquired some Wing Commander posters this week. I'm really not sure who got the better deal, but this is a whole lot of Prophecy. LOAF's exclusive Origin poster auction has ended, but you can still pick up a standard Prophecy one here (now in English). They're 6,69 Euros. 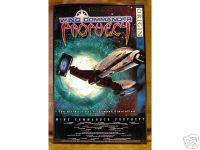 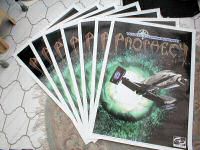 It's that time of the year again. With the end of the Electronic Arts fiscal year, we get a flurry of cancellations, closures and new acquisitions. First up, EA will actually be opening a new studio in Montreal. They'll have 40-70 developers operating there by summer. Montreal has been a growing tech town along the lines of Austin, Texas recently. EA has also partnered with two other companies for future projects. Their first project with Gas Powered Games will involve a collaboration to produce an upcoming real-time strategy game in 2006. GPG previously made Total Annihilation, among others. They actually headquarter right near me in Seattle. EA'a second collaboration announced this week pairs them up with Castaway Entertainment. This studio is centered around a number of developers that recently left Blizzard in a somewhat high profile separation. We'll probably find out more on these new ventures at E3 in May.