Hot on the heels of Standoff's Fralthra comes their new Exeter model which will be used instead of the Gilgamesh in certain points in the game. In other Standoff news, the cockpit struts for their Gladius and Sabre fighters have been completed. The cockpits will also be used for the Ferret and Talon, which will be simulator-only fighters. 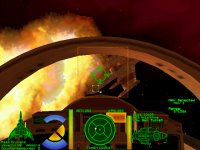 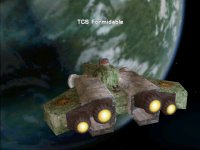 Several additional screenshots are available on the Standoff site.

Wing Commander owner Electronic Arts recently released their financial data for the last quarter and has once again achieved record results. From October through December, EA made $1.475 billion, which is a 20% increase compared to last year. When their fiscal year ends in March, they expect a yearly total of $2.92 billion. No doubt next year they'll break $3 billion. In the last quarter EA released eleven titles that sold more than a million copies to total twenty-seven such hits during 2003. In 2002 they had "only" twenty-two games break a million copies sold. Their next year will be even bigger with new iterations of The Sims, James Bond, Ultima, Medal of Honor, Battlefield, Lord of the Rings and more. You can find their latest investor press release here.