In the early days of Scrye magazine, Jeff Grubb created an article on the making of the Wing Commander Customizable Card Game. This dates back to Issue Ten in 1995. It goes into great depth on the background and implementation of this project. The layout is fun, so I've got some relatively high quality (half meg) scans of each page to preserve the full atmosphere. The article gives some background about the Wing Commander series and what events had to come together to produce a card game. The article has some cool behind-the-scenes information such as the original idea to give the Kilrathi the early edge and reward the Confed player for persevering over time. It also mentions how it was Margaret Weis, Richard Garriott and Andrew Morris who originally suggested and perfected the now-famous diamond hexagon playing field. 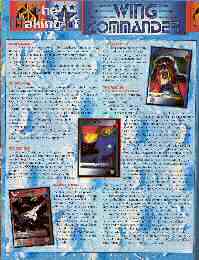 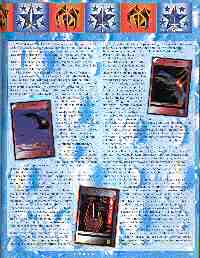 We always plan to each year, but this year we have to have a CCG tournament at Dragon*Con. Some older Scrye Wing Commander scans can be found here.

The 7th Fleet Headquarters has a new location. We're proud to be the new hosts for Psych and Jibbo's impressive Fleet Tactics site. They've been making lots of improvements and fixing things up since their original debut a month ago. If you missed their initial introduction, you're in for a treat. Fleet Tactics takes a look at the Wing Commander universe from the perspective of the WC3 era and examines many different possible angles. Go ahead and redirect your bookmarks to tactics.solsector.net.