Here's your chance to own the same Wing Commander memorabilia that belonged to the pros: Sean Murphy will be auctioning off several Wing Commander items collected during his tenure with Origin! First up are three squadron stickers used on the set of Prophecy (one Wolfpack and two Black Widow) - which you can find here (starting bid $10). These are the same stickers that were used to personalize Prophecy's 'black face' helmet props during the many VDU sequences. The second auction is for a mess of WC:CCG cards, including a starter, two boosters and some loose singles... bid here (starting bid $20).

Sean is a graphic artist who worked Wing Commanders IV, Prophecy and Secret Ops - he's also the namesake for WCSO's Murphy-class destroyers. He's also a really nice guy - I can personally vouch for the fact that he deserves your money! He plans on putting several more items up for bid, including an always-desirable copy of Kilrathi Saga! 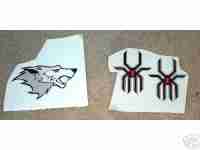 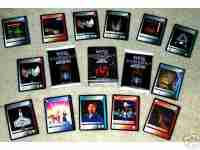 For those who missed it last month, John Rhys-Davies will be making an appearance in Seattle Saturday evening. He'll be primarily promoting Lord of the Rings, but the evening's discussion will turn to some of his past projects, likely including Wing Commander. You can find details here or here.