Last week, an eBay "live auction" took place. Among the lots were two weapons, apparently from Wing Commander. One item was a rifle, and the other was a "flame thrower." Sadly the picture links in the auctions are now broken so we can't identify what the weapons actually were. That said, neither weapon was actually sold since they failed to reach their reserve price so maybe they'll resurface in another auction somewhen. You can read more details about the weapons, including how they were used in Star Trek at these links: Rifle and Flame Thrower.

Update: Justin Beitelspacher has kindly provided us with pictures of the items. I'm still not sure where in WC they are used. 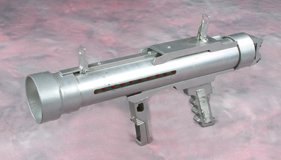