Although I originally had a lot of doubts about the Macross: Do You Remember Love mod for Secret Ops, it seems to be developing at a steady pace. Blackwolf had released a number of new shots again, and now you can see some of the Macross ship transformation in action. 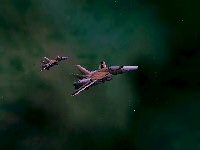 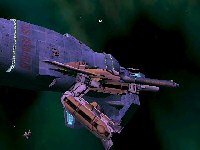 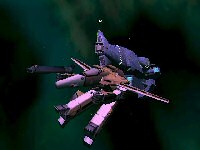 We are still working hard, but the holidays are coming and some work will slow. I'll be releasing in-game shots now and then and answer the question you might have. I have updated the web site and will add more pages as soon as I get them done. Note all models are now high polycount and work great in game and still even have higher resolution textures.

You can find a variety of alternative screenshots at the main mod site here and at the Macross mod forum here.

It's not quite Wing Commander: The Movie: The Game, but it's close. If you haven't been following his every move lately, Wing Commander creator Chris Roberts is currently executive producer of the upcoming comic-inspired Punisher movie. Several sites have recently reported that the new movie will have a video game to go along with it. The game will be released for the Playstation 2 and XBox is the fall of 2004. So far it doesn't look like Chris Roberts himself will have anything to do with the game's production.