A Bonus WCA Episode For You Today

It's the last day of the month, so we're going to use up the last bit of our bandwidth with a Wing Commander Academy episode. The last one this month is "E10 - On Both Your Houses. It's 65 megs and requires Divx. Have fun.

Wedge007 reports that Clive Owen is apparently no longer in the running to play the next James Bond. A widely repeated wire report cites a 'credible source' which claims that "Owen lacks the necessary lightness of touch to make Bond a box-office success." The current front-runner is X-Men star Hugh Jackman. Too bad, as Clive Owen taking the role would have lead to literally thousands of Bond-related news headline puns ('Lev' alone! 'Lev and Let Die', 'From Russian with Lev' and 'You Only Lev Twice'...).

Here's the man Casey was... two drafts and a shooting script before he became Iceman's son:

Cadet Pilot. Early twenties. And our new PLAYER. Dane was a foundling; an abandoned child of unknown parentage adopted by a generous foster family. He's full of fight, enthusiasm and a deep desire to prove himself -- and to find out who he really is.

The one thing Dane does know is, despite the fact that his adoptive family were all "earthworms," he has always had a burning urge to be a pilot. And getting admitted to the Academy was a hard won first step in that quest.

Dane is very bright; a quick, analytical thinker who can get right to the heart of the matter -- which is not to say he never shoots his mouth off or makes mistakes. This kid has an edge; a not inconsiderable streak of daring that often leads him into major trouble. Dane is prone to take big gambles from time to time; something which frequently brings an angry Blair down on him.

Indeed, it seems to Dane (and others) that Blair lives for the chance to land on him with both feet. There is clearly something going on between him and the Commandant, but Dane is damned if he can figure out what it is.

Dane's closest (perhaps only) friend is Maestro. It is a relationship which will be sorely tested when Maestro is captured and tortured by the aliens. Maestro returns to Midway radically changed; no longer interested in Dane's friendship or much of anything else. This is a tremendous blow to Dane; one from which he will barely recover.

Dane should be impetuous at times, young, vibrant a little brash, but a great pilot. He embodies the balance of a truly gifted flyer and someone who must grow up fast in this war. He experiences loss, tries to deal with the constant rag of Maniac and the sexual tension/competition of Nemesis.

Today is another happy day in the US and other countries where you can get away with walking around absolutely anywhere in a Wing Commander flight suit or Kilrathi armor. That's what I'll be doing. If you don't have either, I suggest painting your face like a cat and calling it good. 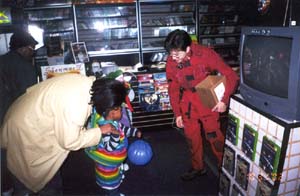