While some talk of a Homeworld 2 mod continues, NewCommanderondaBlock had updated the original Homeworld mod, Fleet Action. The ship files have been updated slightly to enhanced playability. Most original ships have been replaced by Wing Commander equivalents. Previous crashing issues have been narrowed down to the Weapons Effects Pack, so don't use that.

The pack contains Kilrathi (race 1, Kushan), Confederation (race 2, Taiidan), Border Worlds (Pirates 1) and Nephilim (Pirates 2). The Border Worlds and Nephilim ships are only for maps with them built-in. All you need is the original Homeworld. Install it by extracting the zip file to your Homeworld directory. To uninstall, delete the folders "r1," "r2," "p1," & "p2" and files that end with ".ll" and ".script" that are in your main Homeworld directory. Please note, that this mod is NOT compatible with Homeworld: Cataclysm or Homeworld 2. 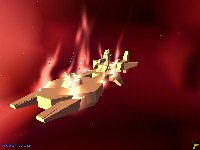 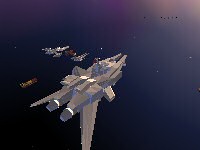 Though impressive, the mod still lacks real textures for the newer ships. You can download this update to Fleet Action here.

TC noticed that Wing Commander and Origin veteran Warren Spector made 1up.com's list of 50 gaming executives to watch. Spector was involved with the first several Wing Commander and Privateer games as well as System Shock, Wings of Glory, Crusader, Ultima and others. I got a chance to watch him play the new Deus Ex earlier this year and he's a pretty nifty guy. His style of production is refreshing as he seeks to create games that provide the player with a variety of options to solve problems. Through the freedom he gives the gamer, Spector noted that occasionally players will find new solutions to situations that the developers originally did not have in mind. You can find Spector's page in the article here at #39. Who's that at #35? EA CEO Lawrence F. Probst III. The full article begins here.