Not Quite As Big

Zohrath has put up a movie clip of the Arrow Light Fighter that he is currently texturing. You can watch his Arrow spin in this 400kB DivX. 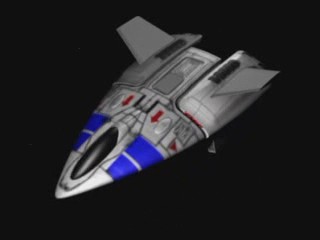 You can leave him some feedback at Crius.net. We previously reported on Zohrath's Kilrathi Dreadnought. You can download a fly-by clip of that behemoth here. (2MB)

We have been posting episodes two at a time, and while there have been lots of downloads of the odd numbered episodes, the even numbers have missed out. We think people have been forgetting to download the second episode posted in each update, so we're having a Blow Up Our Bandwidth Day! Here is a complete list of download links for the episodes posted so far.

Whew, that's nearly 400MB of files there. As a reminder, "episode 7" aired after "episode 6" originally, but chronologically "Expendable" takes place after "Lords of the Sky." For this release we'll be putting up the episodes in timeline order. Also a quick note for people who like using "download accelerators" or segmented downloads: Don't. Our FTP limits people using multiple connections so it won't work.