Most of us know and love the black & white Vega Sector map included with Wing Commander 1's Claw Marks, but below some of you will get your first glimpse of the color Japanese version. The Super Famicon version of WC1 comes complete with a 50 page manual that comes in full color. The booklet is a remarkably faithful translation with a few minor changes and additions. They very faithfully recreated the star positions and territorial lines of the Vega Sector and improved on the graphics and presentation. It's the same basic thing, but much nicer. Japan always gets the most elaborate packaging. 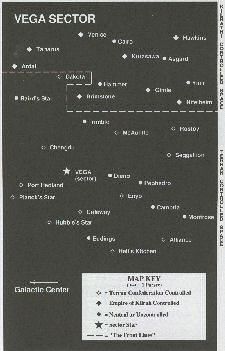 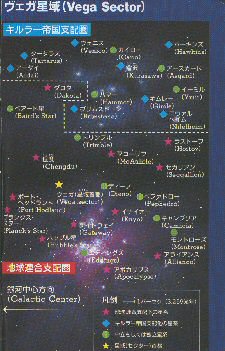 Pictures like these makes you wonder about how much rare and exotic Wing Commander merchandise was actually made. There's plenty more for us to show you in the future, and once in a while even we're surprised when we stumble across something really neat. We'll have to show this one to Aaron Allston next time we get a chance.

I'd like to bring a couple new game demos to people's attention again today. Neither are really tied to Wing Commander much, but both games have a lot of potential and new space sims always give me goose bumps. A quick look around the X2 Egosoft website reveals that they have a 43 meg rolling demo available. They also have a web forum here. I always find web chat zones useful for reading up on upcoming games. Along with promotional bonuses for preordering, it's cool that they also have X2 clothing for sale at the Egosoft site. Not many non-Wing Commander space sims have gotten that sort of send off. Their own shop is preselling the game for 49,99 Euros with a special trading card game, while Amazon.co.uk has it for £25.99. You can find the X2 demo here. The game is set to be released in Europe at the end of October.

Although this isn't exactly a traditional space combat simulator, the Homeworld series has always done a decent job of presenting space ships and space combat in a fun way. The official Sierra site has plenty of pictures and information on the game if you're into a more real time strategy oriented experience. The original Homeworld was also the basis for the neat Fleet Action mod. You can download the Homeworld 2 demo here and access community forums for the game here. Homeworld is set to be released in the US in the middle of next week.