The Dreadnought that we reported about recently has been completed, and it looks incredible. Zohrath has put the finishing touches on it and released a variety of perspective shots. I just wish I could fly by it in a game. 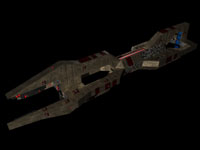 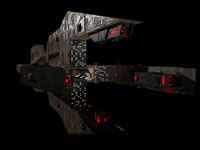 I've finally finished my Kilrathi Dreadnought 2.0 model! I've never made such a detailed capship before, this one weighs in at over 200,000 faces. I'll have it available for download in a few days, meanwhile, here are some pics.

That second shot makes my mouth water. You can find several other shots and provide feedback at Crius here.

Earth & Beyond Shaking Things Up

Despite rumors of its mediocre success, EA's massively multiplayer space sim Earth & Beyond has instigated the kind of sweeping changes to the universe that you'd expect from a persistent world with steady support. The aliens that provide the main antogonist for the game have successfully invaded key areas shaking up the balance of the game. You can read about the latest updates to the universe here.

Humanity suffers a stunning blow as the V'rix draw first blood and seize the mighty Progen Citadel of Praetorium Mons. Primus planet lies in ruins after a V'rix assault captures the base that was once home to Primarch Kahn himself. Amid the carnage, the leadership of the Progen lies in shambles, with the head of all Centuriata, Legatus Var, missing in action. The war continues in earnest, as the struggle to control the Ancient Gates comes to a head. While Jenquai forces fight a desperate battle against the invading V'rix and their deadly hive weapon, Terran EarthCorps forces square off against First Emissary Merjan in her bid to do the impossible and open the way to Aquitaine sector. Meanwhile, shadowy conspiracies and fanatical zealots make their plans to seize power. Players will face hard choices as they choose sides in the galactic struggle to control the fate of humanity.

The game has also held another Fan Gathering in Indianapolis. Good for them. Although E&B was the game EA cancelled Privateer Online in favor of, I'd much rather it succeed than fail and show EA that space sims are a less viable genre. Among other things, we'll be giving away copies of the game (including the first subscription month) at the CIC Birthday Party August 10.

Memories from DragonCon, 29 Days To Go

Wow, we're already less than a month away from the next Wing Commander Fan Gathering at Dragon*Con. Things are really coming together in one fashion or another. Even if you can't make it personally, this year we plan to put together some fun stuff at the convention to keep everyone entertained when we get back. In this photograph you can see us playing with our MechWarrior robot toys. Tye is measuring out an infantry squad's attack range as Weasel contemplates his next move.

Byydo: Hmm, I like Battletech but I don't think I like it this much.
Weasel: Little plastic robots in action!
LOAF: I think I won every time. I'm a robot-winning machine. Go LOAF. I'm ever-so-insecure.
ChrisReid: We could come up with rules to speed it up.. like simultaneous turns in Monopoly Party. I haven't actually ever played this outside of Atlanta and Applebees.
Joe: In your DREAMS, TDB!
Hades: Remember the professional terrain from earlier? Those boxes were our terrain.