There seems to have developed a bit of an uproar over the bashing of Prophecy Advance in the May 2003 issue of the Nintendo Official Mag (UK). One of the common issues seems to stem from the publication of Star Giants photos instead of actual Blue Roses Prophecy screenshots. Due to popular demand, we've dug up their email address: nintendoletters@emap.com. Try to keep the comments polite. Although probably not as important as contacting them directly, TC also dug up a review site for the mag here. The mag gets about a 40% recommendation from reader reviews.

Improve Your WCP and Scare Your Friends!

So you're waiting for the GameCube GBA Player to come out so you can buy a Cube Joystick. Can't wait? Don't have the cash? Time to improvise! A variety of import shops such as Lik-Sang are offering small GBA and GBA SP mods to improve your tactile ability. The first item we've dug up is an improved directional pad and button set for your GBA SP. This is also available in multiple colors. These $7.99 addons also come with an optional magnifier for your screen. For your regular GBA, there are two kinds of similar addons available here and here. They're a little cheaper. You generally get what you pay for, but none of these items bust the bank. I'll be picking up some for the Birthday Party, so I'll let you know how they feel. 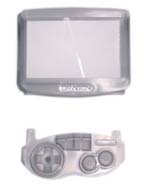 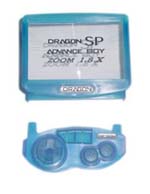 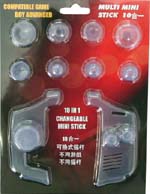 I'd have liked to see one of the characters in Prophecy actually try to sit inside the white egg simulator thing.