While news on the Prophecy release in America has gone quieter than Saddam, there have been a couple of updates. Both EB Games and KB Toys agree on a release date of April 16, though there has been no official confirmation that this is accurate. Whispers say that it could be accurate though.

On the other hand, things are looking up in Europe. UK sites GAME and Amazon UK have placed Prophecy in their catalogues with a release date of April 25. The European publisher Take 2 has confirmed to us that they plan to release on this date in the UK, however it is unclear if the date applies to the rest of Europe too. We hope to get more details on Monday.

Joining the ranks of the complete or nearly-complete fan projects, Dreddnott let us know that a beta-style version of The X-Wing Alliance Wing Commander Total Conversion is available for download. He'd like people to try it out and respond with some feedback. You can download the program here.

For those gearing up for Prophecy in the US, limited numbers of GBA SP units have started to make it out into retail. The official street date is Sunday, but many retailers are starting to leak these out early. They came out in Japan a month ago and can still be hard to find (they release in Europe around March 28). If you're interested in getting one of these right now, you might want to call around. I've got mine and they're great! You can read our original hardware announcement here. 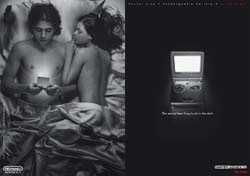 Boy, it'd be funny if someone photoshopped a Game Boy playing Prophecy into his hands here..