The First Just Got Better

Thanks to Raylight we now have a direct version of the first Wing Commander Prophecy screenshot -- so you can see a fair bit more detail than you could in the mis-colored, grainy magazine scan. They ask that we point out that this is not the final cockpit design, as more has been added since the shot was taken. They also confirm that the November release date for the game is possible, although nothing has been set in stone. If you're in Italy, you can find the screenshot in the local equivalent of Nintendo Power. If there's an article, we'd love to see it! 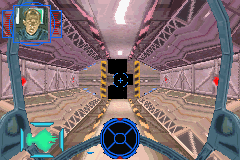 Obee of WingCenter.De has posted the first publicly available Prophecy GBA screenshot to the Chat Zone! Apparently it's from an Italian gaming magazine -- if anyone has the related article, please let us know. As expected, the game looks absolutely fantastic!

Lieutenant Anderson sure is happy... maybe because he doesn't know what kind of Lieutenant he is! Now there's a bad segue! But a serious issue: according to the Wing Commander Prophecy Official Guide Anderson is a First Lieutenant... but according to his rank in these pictures, he's a Second Lieutenant.