We've found the person who bought the $85 End Run not too long ago, and he's regular CIC visitor Michael Sørensen. So no, it wasn't a fake bid. Never underestimate the Wing Commander Fanatic.

I went to WCnews today to read about End Run on various auctions. The one copy that was sold for 85 dollars was sold to me. I got it almost two months after it was paid. I will read it after I'm finished with Freedom Flight. I read the novels in chronological order. When I'm done I'll start all over. It's the 4th time I've started on my books.

85 bucks seems like a high price. I don't even dare to tell my friends about it, but I just HAD to have it. Would any real wingnut blame me? :-) It was the last book to complete my collection. Now I'm happy and somewhat poor.

BTW, I downloaded the pdf-file when it was available.

That's a committed fan! And that reminds me, don't forget to email your End Run typos to Jetlag so he can compile a final release.

On the same note as yesterday's UO2 update, Furniss tipped us off about a Dark Horizons exclusive for February 7. Apparently both EA and Origin have committed to a Crusader No Remorse movie. If you're not familiar with the series, Crusaders No Remorse and No Regret were a popular Origin series (if you can call two games a series) in the mid 1990's. However a sequel, tentatively Crusader No Mercy, was cancelled some years back. If they're willing to let someone take Crusader out for a spin after their WC Movie experiences, I'd be inclined to think they'd easily go for a second WC Movie under the right circumstances. You can read the DH update for yourself here.

Kris found a funny Daily Radar feature with an old Mark Hamill to Skywalker Action Figure comparison. The freaky thing looks more like Freddie Prinze than Mark Hamill. He even has a red-orange flight suit. You can find the page for yourself here. 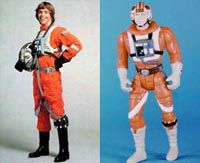 No Word From LOAF Yet

A few people have stopped by #Wingnut to inquire, so I'll say here that we haven't heard from LOAF yet. It's slightly unusual, but I'd imagine he's just recovering comfortably. Hopefully everything's well, and he'll be back and up to speed soon.