Self-described lurker Radovan was kind enough to forward us an interesting article at XBox Family which suggests an interesting - if flawed - theory for the secret franchise behind Project RedLime. Their guess? M.U.L.E.:

This news comes to us directly from a student of one of the original creators of the M.U.L.E. game - Alan Watson, who still pursues game design in Georgia where he teaches. The rumor appears to be true based on Watson being the only living license holder of the M.U.L.E. name due to the death of co-creator Dan Bunten in 1998. We’re still looking for more confirmation, but believe that if this franchise is to be resurrected, it could very well be the much talked about Redlime project that EA has recently announced as being outsourced to the creative minds at Starbreeze.

The idea that a new MULE could be in development is fascinating, but it doesn't really fit with what we know about RedLime - that it's coming from a studio known for action titles and that it is reviving a franchise with some form of established fiction. These don't really apply to MULE, an amazing puzzle game from the earliest days of Electronic Arts history (on the other hand, Mules have surprised people before -- just ask the guys who ran The Foundation...)

Moreover, though, it's great to see someone, somewhere speculating about this -- the initial announcement of the mystery game doesn't seem to have generated nearly as much commentary as it should have. Where are the hard-working game journalists? Where are the top secret leaks? We want answers! 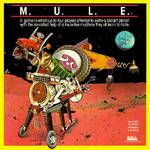