The Xbox 360 Contest went better than I could possibly have hoped - with people from all corners of the globe submitting entries of all sorts. Better yet, they're each incredibly unique - from drawings to interactive software to 3D trailers to physical objects - when we need to prove how diverse the community is, we need point them no further than this update. And the competitors (in no particular order) are...

MajorCam: "To run it the html file and px file need to be in the same directory to work. Open the html file in your browser and click on the WC: Arena logo to play. It'll probably prompt you to download the Photodex Presenter plugin, which it'll automatically start downloading once you hit okay (I had to do this on my machine that doesn't have the slideshow software I used to create this show). You'll also want to have your sound turned on, as there is a soundtrack." (Available here.) 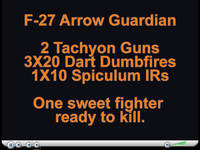 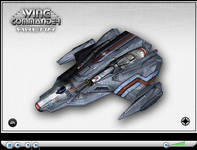 David Kolesar: "Not exactly what I wanted to do, but I realized I wouldn't be able to finish my story in time. 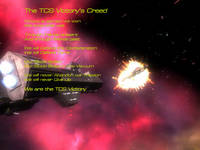 SabreAce: "Even though I'm sure Confed was running a draft during the Kilrathi War, there's always the chance they were also running recruiting advertisements. This is how I imagine such an ad would appear if produced around 2667. The flags at the end are based off a design seen on the CIC a little ways back (itself based off the intro the WC Movie), and my own little tweak of the standard Confed star logo." (Available here.) 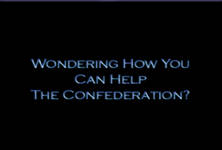 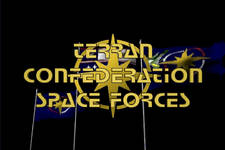 Ironduke: "This just in: Ironduke & The Lovebirds plan to release their brand new album "Memories from the Claw," including the smash hit single "Summer of '55" - due to hit shelves on 2668.250!

In other news: Well, since you're running that Xbox contest (not that I'd need one anymore...) and asked for some WC creativity, here you are! I wrote a song about our beloved Tiger's Claw - from the perspective of one of the Claw's survivors. Okay, so I didn't exactly WRITE that song - Bryan Adams did that for me. But you'll see what I mean when you're listening to it...

Unfortunately, I don't have professional recording equipment, so don't expect too much - but I think it's all right anyway. If you listen closely, you can hear our (my wife's) two lovebirds twitter in the living room - in case you were wondering about the "artist's" name. *g* (And yes, I know, this song NEEDS a guitar, but I can just play the piano...)

Have fun, and most important of all: HAPPY BIRTHDAY! :)" (Available here.)

NuAngel: "Back when I bought Wing Commander for the Super Nintendo, I was a little late to the game. I had to buy it used. And for some reason, nobody had ever hung on to their manuals. I was stuck learning the game on my own. Still, the controls were pretty straight forward, and very user friendly. However, my wingmen kept reminding me that they were ready to fight - but I was never able to turn them loose.

After copious amounts of button mashing, I resolved the issue on my own, June 17th, 1999. Still but 14 years old, I was proud of my accomplishment, and wanted to make a little 'guide' for the next person I sold the game to. I have attached the word document I made up in 1999, as a 14 year old with MS Word and Paint. While it seems plausible that the CIC may have scans of the Wing Commander / WC: Secret Ops Manuals somewhere on site, I just thought perhaps this could be handy, as the complex and annoying combination of buttons is certainly a tough one to stumble on to, and I thought maybe this child-made guide could be handy to someone else.

And, though it was created when I was a child, it was found after dismantling an old Packard Bell 486DX4, pulling the hard drive, and wiring it up to an external drive casing. Solely for the intent of finding THIS very document so that I could enjoy my games again. I was wondering if, perhaps in addition to making it some kind of 'news' if I could submit this as an entry to the WC Arena / "Elite" contest? If not allowable as a contest submission, I still submit it to you as consideration for just some random news on the site or something. " (Available here.)

matthew954: "Here is my entry to the CIC Birthday contest. The first ever F-36 Hornet Radio Control Profile Parkjet. Though what you see here is just the basic airframe. Whats great about this is that it is simple and cheap to build. This particular version is a prototype. I have been kicking around with the idea of building a Wing Commander fighter as a parkjet but didn't have the motivation to begin work on one, at least until now. This model design was derived from the Hornet Blueprints at the CIC. I scaled them up to a 20" wingspan. I can blow them up further but wanted to test the design out first. I would like to have presented the model completed but unfortunately the parts I need to finish it won't arrive until after the contest is over. Although soon enough I'll be launching off on my first sortie looking for some furballs he he." 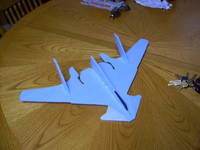 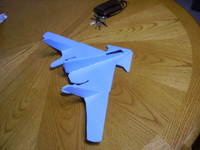 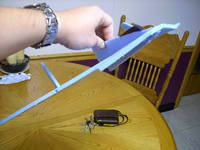 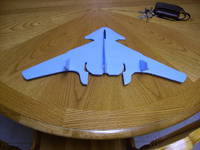 Mekt-Hakkikt: "Here's my submission for the CIC birthday. Given my limited talent and time, I send you a picture (not even high quality I realize) of the Confed Star made with some of my CCG cards. And since the CCG feature the Star of the Armed forces (or isn't it?) and the Kilrathi logo and you get 3 logos in 1! ;-) 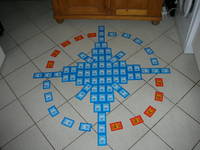 NinjaLA: "Here is my entry for the CIC contest. I wanted to do something that brought arena into the WC universe in a big way.. And what better way is there than glorifying the adrenaline inducing capital ship mode!" 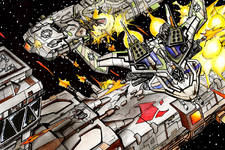 Pedro: "I’m submitting for the competition. It’s only video (XviD format) of work in progress, one of a number of planned visual upgrades for Prophecy (I’m a programmer, its all I can do). I’d love to submit the whole graphics GL as an entry but as it has been in development for several weeks so I guess I can’t. The new nebulas however are a recent hack overriding the geometry and texturing. It will take some time to tweak them, and to override them all, so for now I am submitting only one video and one screenshot as proof that the work is in progress." (Available here. (19mb AVI)) 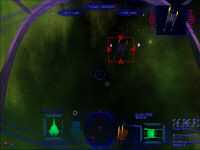 Filler: "Also on behalf of Robbie Fowler, aka Filler, I’ve uploaded the first shot of his hi-res HUD in game. We had hoped to include this with the beta of the OpenGL patch, unfortunately some of the original 3dfx specific materials which the GL uses have only just been tracked down, too late for him to integrate them; for now a screenshot of what has been done will have to suffice. I asked him to replicate the original as closely as possible and personally I think he’s done an amazing job, especially considering this is just the first version." 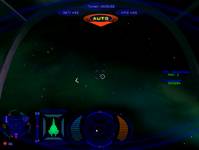 Blitz: "I first had a Idea for a Virtual CIC then I thought how about a WC Museum, then I thought hmm, why not something combined. And thats what I have constructed after about 8 days and nights.

First Off Let me say that the engine I chose for this is not really made for it, its a Tactical RPg engine in the style of the old SSI Gold Box games of the late 80s. But even without knowing almost anything about the engine and not even having a manual I pressed on.

Its turned out fairly well, tho everything does seem to work I'd say it still needs some polishing which I plan on doing as I do believe I will update it. I call this version .073" (Available in two RAR archives here (665 mb ZIP) and here (303 mb ZIP) ). 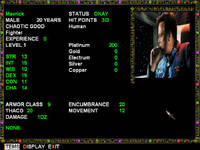 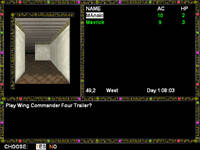 Paragon: "Attached is my entry for the Xbox 360 Contest and a birthday present to CIC. It is the first of a weekly comic strip entitled "Wing Commander: Defiant". Enjoy (there will be another one soon)." 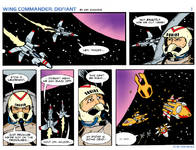 Bob McDob: "What can I say, I'm finally done, and quite proud of it at that. I think the image speaks for itself." 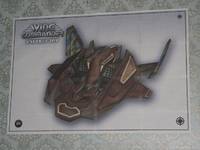 J. Chen: "Wing Commander is something I grew up with, but did not entierly get into until III. This was mostly because I was a bit young during WCI/II, so by III's release I was able to get into it properly.

This is my entry of a Wing Commander themed wallpaper. Done with a healthy mix of flash and photopaint. The Excalibur is a big favorite of mine, so there's no other option for me. A few inconsistencies, but I feel it is good enough to send.

The background was used with permission from http://heavenlyview.com/. 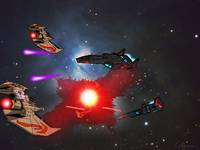 MChen: "This is my submission, two variations of the same picture in the attached zip file honoring three generations of Rapier fighter (doing the undersides was a pain, especially since there don't seem to be many clear shots for reference >_< ) along with my interpretation of what could be a post-Prophecy-era pilot in flightsuit, which is inspired by a few of the different flightsuits of the series.

I chose not to due color considering how much of a mess I'd make of it, though I hope everyone enjoys it still!"

Nob: "It's a short service history of the Rapier-II, didn't get around to getting anything done beyond the first two variants, but oh well." (Available here.)