Since the cancellation of Enterprise last year, Star Trek fans have wondered what would be next for the franchise. Even the publication schedule for printed books seems to have been cut back. There's good news on the horizon however. Along with rumors of the next movie and animated series on DVD, several months ago Bethesda announced that it would be publishing a pair of Star Trek games this fall. The Nintendo DS and Sony PSP will be receiving a strategy game called Tactical Assault. Slightly closer to home, the PC and XBox 360 owners have Star Trek Legacy to look forward to. The game will combine elements from all five major television series. Players will naturally progress from one era to the next to continue the large overarching story. Gameplay will be from the perspective of individual ships and coordinated task forces on the move. Throughout the single player campaign, players will accumulate "command points" that they can use to upgrade their ships and commission newer models. The developers have compared some of the game's epic battles to the Dominion War engagements seen in Deep Space 9, but there will also be more objective-based missions and goals as well. Some sixty ship classes will be available, and multiplayer support will exist on the internet and XBox Live. A recent GameSpot preview said the game's physics will be representative of the larger ships under your command, but a recent GameBiz article also compared aspects of the combat engine to Wing Commander. It sounds like this one is coming together well, and it should be a game to watch out for this fall. 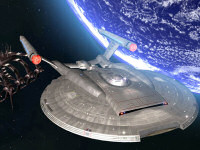 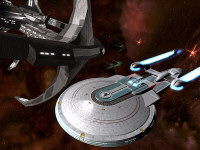 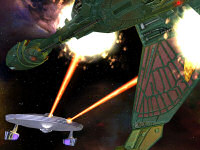 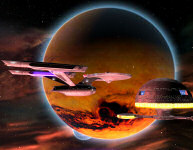 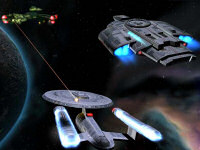 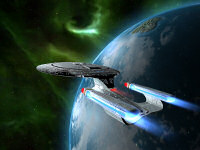 GS: Will you be able to target certain systems on enemy ships, such as shields or engines? Can you cripple targets this way, or is combat more general in terms of damage? In other words, pummel their shields down to nothing and then unload on their hulls?

GC: You'll be paying attention to the strengths of your enemy's specific systems. It may be wise to knock out the engines of that pesky destroyer that is harassing your scouts. With their engines out, they'll easily fall prey to the big guns of your battleship.