You Got System Shock in my Wing Commander!

Origin games have always been famous for their in-jokes -- from the Bloodfang in Ultima VII to the WEC (Crusader) references in the Secret Ops fiction, there's a rich tapestry of unofficial crossovers. Today we're looking at an especially unusual relationship... in Wing Commander, System Shock is a game (turned movie), and in System Shock Wing Commander is a game you can actually play! Wing Commander III's Victory Streak manual included a 'HoloVid review' about a new movie based on System Shock's story (with the proper character names):

Hail SHODAN radiates with cyberpunk action and the good looks of Clint Mason. After streetwise hacker James Finn (Mason) accepts the challenge to punch deck into Citadel research station, he unknowingly removes the logic systems behind the station's artificial intelligence. Finn finds himself trapped in a steel jungle with nothing but his hands and a few electro-magnetic grenades. The furious pace of this epic game-based HoloVid will send you reeling through the aisles ... the ending will astonish you (2.24 hours) ***

Wing Commander 3 for the 3DO went one step further and actually included a screenshot from System Shock alongside the 'review'!: 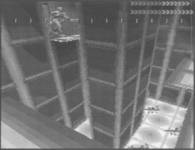