As Crusader: No Remorse opens, three Silencers are walking through a sewer. One of them tries to make small talk and another turns to him to deliver what, oddly, be the game's most famous line: "Shut up, Vittek!" 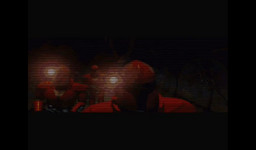 Then, in Ultima VIII the name shows up again--when the Avatar discovers a letter about the missing Skull of Quakes signed by "Lieutenant Vittek"! 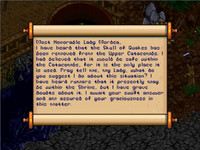 Okay--but what about Wing Commander? Well, unfortunately his WC cameo never made it into the canon... but look closely at this screenshot from Privateer 3. That's right, it's the TCS Vittek: 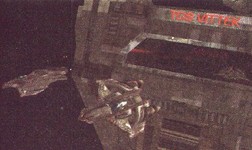 So who is this guy? He's Mark Vittek, a prolific and multi-talented Origin veteran! Mr. Vittek got his start working on Wing Commander II. He helped design several Ultima games and went on to be lead designer on the Crusader series. After that he was an essential member of the Privateer 3 team (more about that in another update) and later worked on Brute Force at Digital Anvil. Today, he is a filmmaker in Austin.