Pix and Dennis Mull have both recently found an interesting compilation by Empire Interactive. The set bundles together Wing Commander, Civilization, War in the Gulf and Frontier: Elite II all in one pack. Two of them are space sims, plus there's a tank sim and a classic turn-based 4X - not unlike hundreds of various '90s packs. However, this one is titled "Strategy 4 in one." In fact, the back of the box claims you can "build an empire on earth or fly across the galaxy, you can do it all with this pack - 4 of the greatest strategy games of all time." Now you know!

WING COMMANDER puts you in the middle of the most intense starship action you've ever experienced outside of a movie theatre. But in WING COMMANDER you're the star! "WING COMMANDER changed the way that other developers thought about designing games. This is more than ever an essential addition to any self-respecting PC gamer's collection." -PC Review

It is pretty cool how much play Wing Commander got in bundles like these. This was probably released in late 1994 or 1995 - in the era of Wing Commander 3! 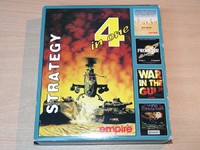 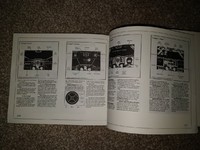 I just ran across it and it's a new one on me. Kind of curious to see Wing Commander in a strategy game bundle.

[The manual] has a shrunken reproduction of the playing Wing Commander section and all the other docs but missed the rest of Claw Marks. According to the back of the box WC was one of the 4 greatest strategy games of all time circa 1995.

The DSG on the back is Dixons Group so it was probably only sold in Dixons, Currys and PC World. Would explain why there don't seem to too many about.