TechRaptor has published an article on the history of Origin Systems. It's a rather in-depth piece that focuses on many of the notable developers who joined the company in the early days and then went on to influence the industry for more than three decades. Wing Commander is acknowledged as the powerhouse alongside Ultima, but there is also due credit given to how ground breaking Ultima Underworld was and how it then also went on to directly feed games like Doom and System Shock. It's a good refresher for fans who might just be familiar with how Wing Commander came to be. The tone does shift quite a bit at the end when they talk about an "aggressive takeover" by Electronic Arts that led to the company stealing its innovations. We've been outspoken when it comes to EA's series of mistakes that resulted in the cancelation of numerous promising WC games in the early 2000s, but that's only half of the story. Origin was a standalone company for less than a decade when they began struggling with the costs of scaling up to large multi-disk games. EA resolved that crisis and funded everything after WC1&2, so it doesn't seem quite fair to just cast them as the villain without considering that context. Check out the full article for yourself here.

With the Ultima games becoming progressively bigger and more complex, Origin also began to pivot to other genres and niches. It was at this time that Chris Roberts joined the company and directed the RPGs Times of Lore and Bad Blood, which became mere footnotes to the 1990 release that defined the company’s identity as much as Ultima… Wing Commander. There were space combat simulation games before Wing Commander, but it raised the bar for the whole industry in terms of production value and realistic simulation.

Wing Commander was a great commercial success, and the demand for expansions and sequels didn’t diminish for most of the 1990s. Origin Systems was fully established as a powerhouse of both RPGs, simulation games, and first-person 3D technology. 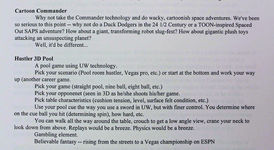