Five of the biggest movie studios have surprisingly banded together to fix an annoying aspect of the digital age. As we accumulate movies across different platforms, our library gets scattered and we have to utilize a wide variety of services to see what we own. But now, movies that that were produced by 20th Century Fox, Warner Brothers, Universal, Disney and Sony Pictures and are owned within iTunes, Amazon Video, Vudu or Google Play can now be interlinked under an umbrella called Movies Anywhere. And Wing Commander is fortunate enough to be part of this new system! Whatever you own on one of the platforms and from one of the studios mentioned above instantly becomes available on all of the others. It all looks a lot more user-friendly and inclusive than the UltraViolet scheme. There's also several decent free movies that they give you if you sign up now. So if you happened to pick up Wing Commander on sale at one storefront but prefer another, now you're in luck! If you don't yet own it digitally, the going rate is $9.99 at iTunes, Amazon, Vudu or YouTube. Occasional sales can bring the price down to around $7, however lately these have been somewhat fewer and farther between. 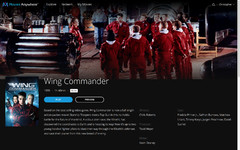 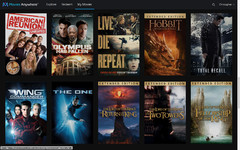