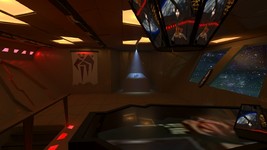 Aginor is nearly complete writing the fiction for his Sivar's Hand mod. The plot portions will be merged with a campaign that has about ten varied missions. More is possible later, but the plan is to keep the size manageable so that it has a better shot at being completed. Lars has also finalized the main working hall that will serve as the nerve center for gameflow sequences. There are also plans to integrate the project with the Saga Plus enhancements to take advantage of the latest user experience upgrades in the Freespace engine.

Chapter 11 is finished, more or less. I will make another pass though, it is far from perfect yet. I will start with chapter 12 this week, which is going to be the final chapter, after the last mission.

As of now there are 11 missions in the Sivar's Hand campaign:
M-01 to M-10 with an additional mission M-06a. I know it doesn't sound much, and I guess y'all will be able to play through it rather quickly, but those missions are a lot of work if you don't want them to be repetitive. M06a was added after the other ones were done, because I had
- an idea for a mission a bit different than others
- a nice bit of story to tell, so I could add-in another chapter after it

When I am not working on something else for the mod (sometimes I don't have more than half an hour of time so I can't really write on the story or do real work on the missions) and I have the time for it I am going to make a concept (mainly some notes and playing around a bit in FRED) of another mission I would like to add between M-08 and M-09. If the mission idea I have turns out to not be fun I will ditch it and add the story bits to the chapter before. If it turns out to be fun, I will add the mission and its own (small) story chapter.

Also I will try to finally install a WCS+ dev build and try out all those cool features.