Ultima Online's producer has announced a major change in the operation of the long-running massively multiplayer game. UO was born in Austin, Texas alongside the Wing Commander series at Origin Systems. It was then transferred to EA Redwood Shores in California and has spent more than seven years being run out of EA/Bioware Mythic/Entertainment in Maryland. Now, a handful of Mythic employees have formed a new studio, Broadsword, which is taking over management responsibility from EA. EA will still own the game and run its billing system, but the day-to-day matters will be executed by Broadsword. 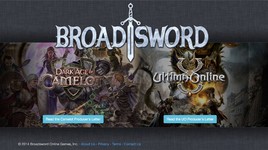 There's been some concern voiced by the Ultima community, but I think this is a positive step for the game. It's truly incredible that an MMO (the MMO) started at Origin in 1997 is still humming along in 2014. Mythic has had some ups and downs, including the recent closure of the Warhammer MMO, so I see this as a move that will insulate UO from any negative shocks that come Mythic's way in the future. And in a best case, clearing this from Mythic's plate may even leave room for the developer to take a fresh stab at an Ultima, Wing Commander or other classic franchise.


Broadsword will also be running Dark Age of Camelot, another classic MMO, and its founding team includes one of the original co-founders of Mythic. It'll be very interesting to see what they can do with a streamlined focus on these two games. The team sounds excited and upbeat about the future, and we wish them good luck!

I come to you with some exciting news! Since its humble beginnings at Origin Systems Incorporated in 1997, through development at EA Redwood Shores and for the last 7+ years at Mythic, Ultima Online™ has been enjoyed by millions of devoted players around the world.

The UO team will continue to work as hard as ever under our new banner. In the immediate future, we will be putting out a publish for Valentine’s Day and a few bug fixes, along with polishing a final release of Vendor Search. I will be putting out a list very soon of all the features we will be working on this year to get everyone’s feedback as well as some updates regarding our ongoing projects.

Will this transition alter the plans for Ultima Online in the near term and the future?
Yes! Both Broadsword and EA are heavily invested in the continued success of Ultima Online and our future has never looked so bright! Customers in need of help or questions should contact uo@broadsword.com

Is Broadsword an Electronic Arts studio?
No. However, for purposes of Ultima Online, Broadsword will be operating the game on EA’s behalf to continue its success.

Will there be changes to the Ultima Online development team?
Yes! Broadsword's additional investment into UO gives us the freedom to expand our resources for bigger projects, so again - the future has never looked so bright!