One RPG Campaign Concludes, Another Just Getting Started

Development work on capi's spirited RPG campaign Vespus is starting to wrap up. Over the last couple of months he's made good progress on its missions. There's even some interesting electronic warfare stuff going on involving a Zartoth. After a few finishing touches, it's just on to proofreading and then fans will be able to play for themselves. As the story concludes for this adventure, capi is also wondering what the next theme campaign should be about. He's got several diverse options including the events of Pilgrim Stars/Truth, a dedicated Bearcat squadron, a Kilrathi mission and possible ground combat involving marines. You can vote on your favorite at the CIC Forums here. You can also learn more about capi's Wing Commander RPG here or here.

Anyway, as I mentioned in today's update I'm beginning to give some thoughts as to what I want to do as far as the next campaign goes. I've got four ideas of my own and I can't decide on which one I should do next, so I've decided to open it up to the opinion of the CIC community - what should I do next? I'll probably leave this poll open until I get a good sample.

The only thing I ask is that if you do respond with "Something else" that you give me a suggestion; it doesn't have to be a good one, just something that you'd like to see. 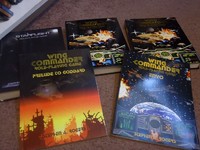