Sol: Exodus, the new space sim from Seamless Entertainment, will be available starting today on Steam for just $9.99. I was very kindly allowed to take a look at the finished product over the weekend and would like to share my thoughts with the Wing Commander community. 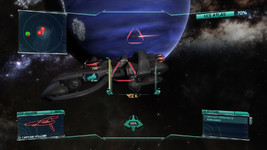 It should be no secret to longtime readers that I am something of a curmudgeon when it comes to space games that aren’t Wing Commander. The 1990s were rife with soulless imitators that sought to be nothing more than the last Wing Commander done cheaper with the benefit of the latest video card drivers. Then the last decade was a scattering of well-meaning attempts to recapture our favorite series’ glory that generally suffered from trying to do too much with too little money. Suddenly every attempt needed a Privateer-style open world, a Wing Commander cinematic story and years worth of “player wish list” bucket items involving overly complicated physics and off-putting gameplay options which scared away the casual fans. And don’t even get me started about shoehorning multiplayer into space shooters… 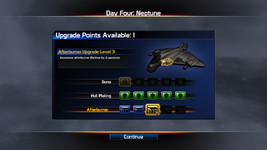 I’m happy to announce that Sol: Exodus is none of these things. This is a small game that’s aimed at giving a modern audience their first taste of how much fun a space shooter should be. The game forgoes all those pitfalls to give us something unique: a deceptively simple action game that should teach today’s gamers how awesome space combat is. Let me run through some of the highs and lows that I think will resonate with Wing Commander veterans: 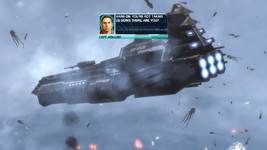 It should come as no surprise that Sol comes from a scrappy young development team in Austin, Texas—the city that first birthed the Wing Commander franchise twenty-odd years ago (for those interested, the core team does not include any Wing Commander veterans, although Marc Schaefgen and David Swofford, who did sound work and PR for classic Origin titles respectively, are both credited in the same roles as contractors on Sol.) I should stress that it’s a small game. No, the graphics aren’t as seamless as the latest BioShock or Call of Duty… but they’re fast and full of color and character. Yeah, cutscenes are done in-engine and in-flight, like Secret Ops. And yes, you’ll be playing only nine or so fairly lengthy missions for your $10… but in addition to being hours of fun for old hands it’s also the ideal game for introducing today’s players to the concept. You should gift Sol: Exodus to your kids, relatives, friends, well wishers and others in the hopes that they’ll realize space sims should be the next big thing. 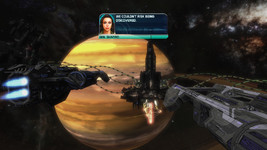 As fun as it is, most of all what I want is for people to see Sol: Exodus as an important game, a new beginning for the game type. I want Electronic Arts to look at Seamless Entertainment and say hey, yeah, these guys have the right idea, maybe we should bring back space sims. Am I going to start the great Sol: Exodus community fan site? Probably not, but then I’m getting too old for that. I do truly believe that someone reading this today probably should. The game is great and its world has enormous franchise potential. I would not be surprised if we’re playing a massive Sol: Exodus sequel a few years from today… and if its success helps convince EA that there’s a market for a certain other space sim franchise, all the better! 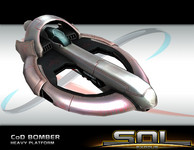