Gamerlimit Reunites With an Old Friend

Although a few weeks late for the game's 15th birthday, GamerLimit has honored a special title in its 'retro reunion' feature. Wing Commander 3 gets the nod for its incredibly immersive and as-advertised interactive movie claims. The branching plot, top notch graphics and all-star cast are cited as contributing factors as well. Like most Wing Commanders, the author notes that WC3 holds its own against modern action games and blows away the competition's interactive storytelling features. Check out the full article here.

When it was released in 1994, Heart of the Tiger was dubbed “the world’s first interactive movie”. While most gamers would scoff at such a claim today, by all accounts it was very much what the media hyped it to be. With a 10-minute intro clip, and no main menu, players knew straight away what they were in for.

One of the reasons that the Wing Commander series was so successful was for exactly that reason: the storyline. Every game played out like a movie, even more so in the third and fourth instalments, and gamers were able to feel a true sense of connection to the protagonist, Blair. 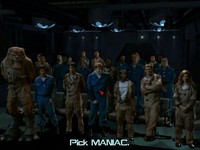